Showing posts from 2007
Show all

September 18, 2007
OMG! This game is insane. I've been playing through the opening level and am being blown away. This is not your normal shooter. Its all about atmosphere and creepy sound and video. Not for the faint hearted. Check the reviews. http://www.metacritic.com/games/platforms/xbox360/bioshock
Post a Comment
Read more

September 18, 2007
Downloaded some more demo's Ninja Gaiden Sigma, Harry Potter and Order of the Phoenix, NBA 08, Ghost Recon Advanced Warfighter 2. You would think my dsl would cap, but its still active for some reason. While they were downloading, I continued playing Gears of War on the 360. Man, what an awesome game. Funny thing is that coming up over the next month, we have a ton of good 360 games coming up. Bioshock, Project Gotham Racing 4, Halo 3, Call of Duty 4 are all coming out in the next 30 days. On the PS3 side its not as rosy with the good games coming nearer to November / December. If I was to advise somebody on a console buy right now, my vote would be for the 360. Will let you know when that opinion changes.
Post a Comment
Read more

September 13, 2007
Something really well executed by Microsoft is the XBOX Live Service. It's really a well designed portal to a ton of content for the 360. Playable game demo's, Videos, Songs, Movie Trailers, Downloadable games, etc, it totally dwarfs Sony's offering. Of course, this is due to the headstart that Microsoft enjoys in the next-gen console market, but even so, it really is a huge positive. You can download and play most games on the shelves in stores today and evaluate them before buying the retail game. Considering that the game are averaging R500 a pop, its useful. Of course downloading 500 meg or 1 gig demo's in SA is just a not feasible with our capped & slow internet, so I took my xbox to a friends office where they have an uncapped Internet line which is unused over weekends. I hooked up the Xbox, got an Ip address and was stunned to find out that it did not support proxy servers. For this stupid lack of functionality to exist almost 2 years after the conso
Post a Comment
Read more

September 13, 2007
Lately, my poor 360 has been neglected quite a bit and, I decided to give it some attention in the week. Of course the 3 games I played were Gears of War, Guitar Hero 2 and Colin McRae Dirt. All three of them are just plain awesome and tons of fun. Picking up the XBOX controller reminded me of the differences just in the feel / functionality of the 2 controllers. Big differences are that that the 360 controller is much heavier. In practise, I actually like the PS3's lightness, but that lightness comes at a price. There is no rumble support, so when you fire a gun or crash a car, there is no shake or vibration. Of course rumble is a subtle effect, but when you go between systems it is noticeable. The 360 one is definately more bulky, I suppose to house the extra functionality & motors, but the extra weight is not a problem. Its going to sound wierd, but its like the difference between a small gun and a big gun. Sometimes, size does matter! The PS3 has the tilt-sensiti
Post a Comment
Read more

September 13, 2007
This is a neat feature on the PS3 which has no equivalant on the 360. Basically, you use the wireless capabilities of both devices to stream movies / pictures / sounds / games from the PS3 to the PSP. The PSP in effect becomes a remote screen of the PS3 and the PS3 will send screen output over wireless to the PSP. Tonight I tested an mp4 video I downloaded from the Playstation Store streamed to the PSP. It played instantly with no buffering, etc. Considering that the video is Hidef, the scaling to the psp low resolution small screen was pretty good. To take it to the next level (as one does), I fired up Nero MediaHome on my PC ensured that the PS3 detected the UPNP media streaming server on the network. I then started RemotePlay and the PSP was able to browse video's on my PC's hard disk and watch them. For those of you who don't get the significance I had the following setup: PS3 connected to PC over Wired Ethernet PSP connected to PS3 via Wireless PS3 accessing
Post a Comment
Read more

September 13, 2007
Been getting some complaints that I haven't updated this in a while. Not to worry, just been 2 busy playing too blog. I guess that's a good thing. For the next few posts, I am going to talk a bit about things I like about the PS3 vs the 360. Each system has things to like/disklike and different people like different things, but I'll just talk about the stuff that affects me directly.
Post a Comment
Read more

Video of Me playing Rub a dub

September 03, 2007
I tried to videotape the game on my cellphone so the quality is very bad. The reason for my arm obscuring the shot is that I wanted to show that I was controlling the game by tilting the controller and using the motion sensor. Also note that its hard to play and videotape. Left hand not knowing what the right hand is doing sort of problem. Also, I don't know if this post will include the video :(
Post a Comment
Read more 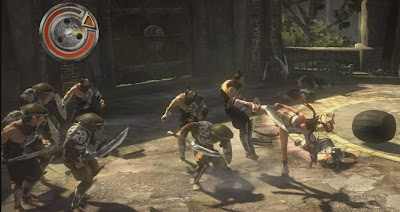 I tagged the Heavenly Sword demo from the Playstation Store last night. About 1 gig in size. It downloaded through the night and I checked it out. Pretty awesome graphics and gameplay, but apparently it becomes repetitive. Its a pity as it looks and plays really well. http://www.youtube.com/watch?v=XKKYurY_WeQ
Post a Comment
Read more

September 01, 2007
After booting back into PS3 mode, I restored my data (Tekken, GT:HD, Flow, all savegames, etc) off the external usb and it worked like a charm. I am doing this post from the Ubuntu PS3 side now as I have just update all the latest patches etc on the LinuxOS for the PS3. Now I am going to reboot, play some games, etc.
Post a Comment
Read more

September 01, 2007
It took a while. The Ubuntu LiveCD install worked the same as installing on a pc, but took about 3 times as long. When it was done I was able to boot up Ubuntu from the hard drive. Startup time was slower than pc, but I guess it was a first time boot. Will see if it improves. I updated the codecs and played a dvd using the built in totem gnome media player and it seemed to be fine, although the screen resolution is only 1280x720. Need to work on that. To boot back into PS3 mode, you need to reboot and then type boot-game-os when the linux bootloader appears.
Post a Comment
Read more

September 01, 2007
Something I neglected to mention is that I had to format the PS3 hard disk to create a partition for the Linux install. When you consider that I had only last night downloaded some games, this would normally be an insane step. However, thankfully, the PS3 has the option to backup its data to an external USB drive. I hooked up my IPOD and it was detected as a storage device. I did the backup and when I'm done faffing around with Ubuntu, I guess I'll find out if it works.
Post a Comment
Read more

September 01, 2007
As I type this, Linux is currently being installed on my PS3. I had to unplug my keyboard and mouse and plug them into the PS3, rendering my pc useless for the moment. The version of Linux I am installing is Ubuntu 7.04 and I am using the LiveCD install. So yes, as I type this, I am using Firefox on the PS3 *WHILE* the installation is proceding in another window. Beats watching progress bars or reading marketing lies as the install proceeds. The install is quite a bit slower than the pc version, I must say. I hope the final running version is faster or I am going to wipe it!
Post a Comment
Read more

September 01, 2007
Wish me luck. Going to unplug my keyboard and mouse and plug into ps3, so I can't blog until then.
Post a Comment
Read more

August 31, 2007
It works! Didn't initially though. I have the tversity media sharing application on my pc, but the ps3 refused to detect it. After some reading, i saw that you need to enable upnp on the PS3's network settings. This wouldn't come on for some reason. I then went into my local router and enabled upnp via the web interface. The PS3 reconfigured and immediately detected my pc. I could now play movies, music and photos from the pc's hard disk. Not bad. Quality was fine, but I want to see if I can improve it further.
Post a Comment
Read more

August 31, 2007
Once I was able to login, I was able to browse demo's / video's and movie trailers. They also have a selection of small puzzle games. I selected GranTurismo HD and Tekken 5: Dark Resurrection for download. GT was free and Tekken was R95 ( +- US$ 13). Good value, I thought. The downloads went into a queue and the funds off my credit card. Its still downloading as I type this. The GT demo was 690 megs and the Tekken about the same. Looking forward to checking them both out.
Post a Comment
Read more

August 31, 2007
First up. I connected after unpacking it at work to a normal standard def tv using the red / white rca and yellow composite cable. Everything was clear and readable and the games looked nice. You could tell it was better than a PS2, but not stunning. When I got home I plugged it into my 26inch Samsung HD set. Its max resolutions are 1080i and 720p. Upon switching on for the first time with the HDMI cable, the PS3 asked me if I wanted to autoconfigure the display. It detected 1080i and I was happy to select yes. Using the built in web browser, the web pages display a hell of a lot better at 1920x1080 vs 1280x720.
Post a Comment
Read more

August 31, 2007
This was a bit of a pain as I had to do it from the console. I tried pre-registering via the web and linking to the account from the PS3. No such luck. The process was quite slow and had me worrying that the network speeds would suck when I downloaded any games, but other browsing seems normal speed. I was detected as a South African user, so I just followed the wizard and registered.
1 comment
Read more

Just got my PS3 today

August 31, 2007
I was inevitable really. Tried to hold out as long as I could, but today it happened. I am planning to blog for a couple of weeks to talk about my experiences with it. This is just an intro post. Will post some more details over the next few days. Hope somebody finds some useful tidbits of info here.
Post a Comment
Read more