Showing posts from June, 2016
Show all

Excellent post. Originally shared by Kate Martin All righty. Let's review. As it stands this morning: * Police have registered a 57% increase in racist incidents, with attacks on European citizens living and working here, as well as a rise in attacks on black and Asian citizens by a surging far-right. (Leave voters insist that they didn't vote Brexit for racist reasons, and in most cases that's no doubt true. However the campaign and vote has empowered these people and helped to legitimise their attitudes.) * Two-and-a-bit TRILLION dollars wiped off the world economy. * Sterling now down to $1.3220 against the US dollar; at €1.20 against the euro. (In other words, we're approaching parity with that struggling European currency we were supposed to be freeing ourselves from even though we weren't tied to it in the first place.) * Royal Bank of Scotland and Barclays tripped automated suspensions on the markets after their stock dropped 26% and 18% respectively. (Note:
1 comment
Read more
June 27, 2016
Brexit fever. Well done Iceland
1 comment
Read more

I like to do more than one of these when I post. This next one is also a Peter Gordeno one. I'm not sure if he or...

June 27, 2016
I like to do more than one of these when I post.  This next one is also a Peter Gordeno one.  I'm not sure if he or Martin Gore did the arangement, but this one of my favourite B-Sides ever.  This is off Black Celebration and this song can bring me to tears or send shivers down my spine if I let it. ;) Don't ask me why.  Martin is so good on this track and the accompaniment is so understated and swells at the right moments.  I guess that's the instinct of a great band.  There are better audio recordings of this track., but I'm posting one with video.  If you don't know this track, I hope you enjoy it as much as I have for so long. On a separate note, if you see any comments from Karl N, he is the guy that expanded my knowledge of music 10 fold.  I was previously only familiar with what was played on the radio and my limited budget, but he introduced me to countless other bands.  Everyone should have one of those friends in his life. Of course, he is frustrated that
Post a Comment
Read more

June 27, 2016
My mini tribute to Peter Gordeno ( Keyboard / vocals ) I love what he brings to the Depeche Mode live performances,  feel free to enjoy the whole video, but I love his improvisation when the crowd refuses to let go of Home.  Bear in mind, this is a video / concert that needs to be enjoyed in full.  not only for the excellent performance, but for the cameo by Alan Wilder! #depechemode   Sometimes when a band replaces a long standing lineup, they hit solid gold. Mark Hart for Crowded House, Warren Cuccurullo for Duran Duran and most definitely Peter Gordeno and Chritian Eigner for Mode. http://www.youtube.com/watch?v=ntRdKCVBBRw
Post a Comment
Read more

June 14, 2016
Sea of Sin Sensoria Mix Related to the World in my Eyes Mode to Joy mix.  From the same disc actually! http://www.youtube.com/watch?v=1nX2mLpr3yA
Post a Comment
Read more

To counter the slower Agent Orange, allow me to share one of my top 3 mode remixes. Along with Get the Balance...

June 14, 2016
To counter the slower Agent Orange, allow me to share one of my top 3 mode remixes.  Along with Get the Balance Right, what I love about this track is how it builds from a simple start, adding more percussion and synths, building all the way until the killer bass synth just after a minute and then the first verse.  The song just keeps getting better and keeps the building until 2 minutes in when it gets even better.  This is such a finely crafted track, I can play it on repeat for ages (I have). It's not even one of my favourite songs, but I think the percussion in this mix is what keeps me so interested.  All the little bits of synth that pop in and out keep evolving the track and when the bassline comes back round about 3.50 you get a gentle intro to the next vocal 30 seconds later... After 5 minutes it's nearly over and you're winding down to a close. I don't think there is a better remix cd than this one.  It comes from a World in my Eyes single of the Violator albu
Post a Comment
Read more

Tonight I've decided to slow things down and post a few tracks that are very moody and would get very little plays...

June 14, 2016
Tonight I've decided to slow things down and post a few tracks that are very moody and would get very little plays when I was younger.  As you get older you realise that good instrumentals have "voices" and evoke atmospheres and moods and even trigger memories. One of the first tracks that really got me into instrumental DM in a big way was Agent Orange. Since then I've come to realise that there a tons of songs that didn't quite make the albums that are dear to me.  Nothing to Fear,  https://www.youtube.com/watch?v=mjI-Dlw7vs4 This version is live at the Hammersmith Odeon.  Probably when I realised how much I love Alan Wilder s contribution to DM. During the Music for the Masses / Violator albums they also did a lot of b-sides with instrumentals.  St Jarna, Pimpf, Moonlight Sonata and others are waiting for you to discover.  Of course, Agent Orange was also from Music from the Masses, as can be seen in the thumbnail. As simple aside.  When I got my first decent p
1 comment
Read more

Updated my blog after more than 2 years with some info on batch converting my older video files to X265 with WinFF. ...

June 13, 2016
Updated my blog after more than 2 years with some info on batch converting my older video files to X265 with WinFF.  Hope some of you find it useful. edit:  Would be a lot more useful with a linky http://istoff.blogspot.co.za/
Post a Comment
Read more 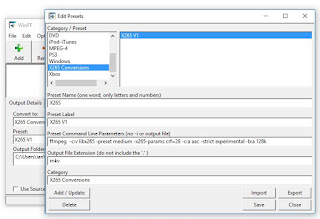 I've been idly thing of a way to convert a whole lot of older standard def video files to a more efficient format.  With the advent of h264 and more recently x265, I wondered what options I had for a hassle free conversion tool. I've been googling this randomly over the past few weeks, encountering lots of links, but nothing that appealed to me.  Endless scripts & tools with weird dependency issues that I didn't want to entertain.  Sadly, I even downloaded a few before deciding to solve the problem myself. In a nutshell, I googled a ffmpeg command line with appeared to work with my test file.  I ran it on a few files and appeared to snip two-thirds off the file size without much tweaking.  Now, I'm sure the fussy ones among you could do it better, but here's what I settled on as my current solution. As some of you know, I am partial to Winff as my weapon of choice.  I have been using for years and have contributed code to the project to add features I want
Post a Comment
Read more
More posts